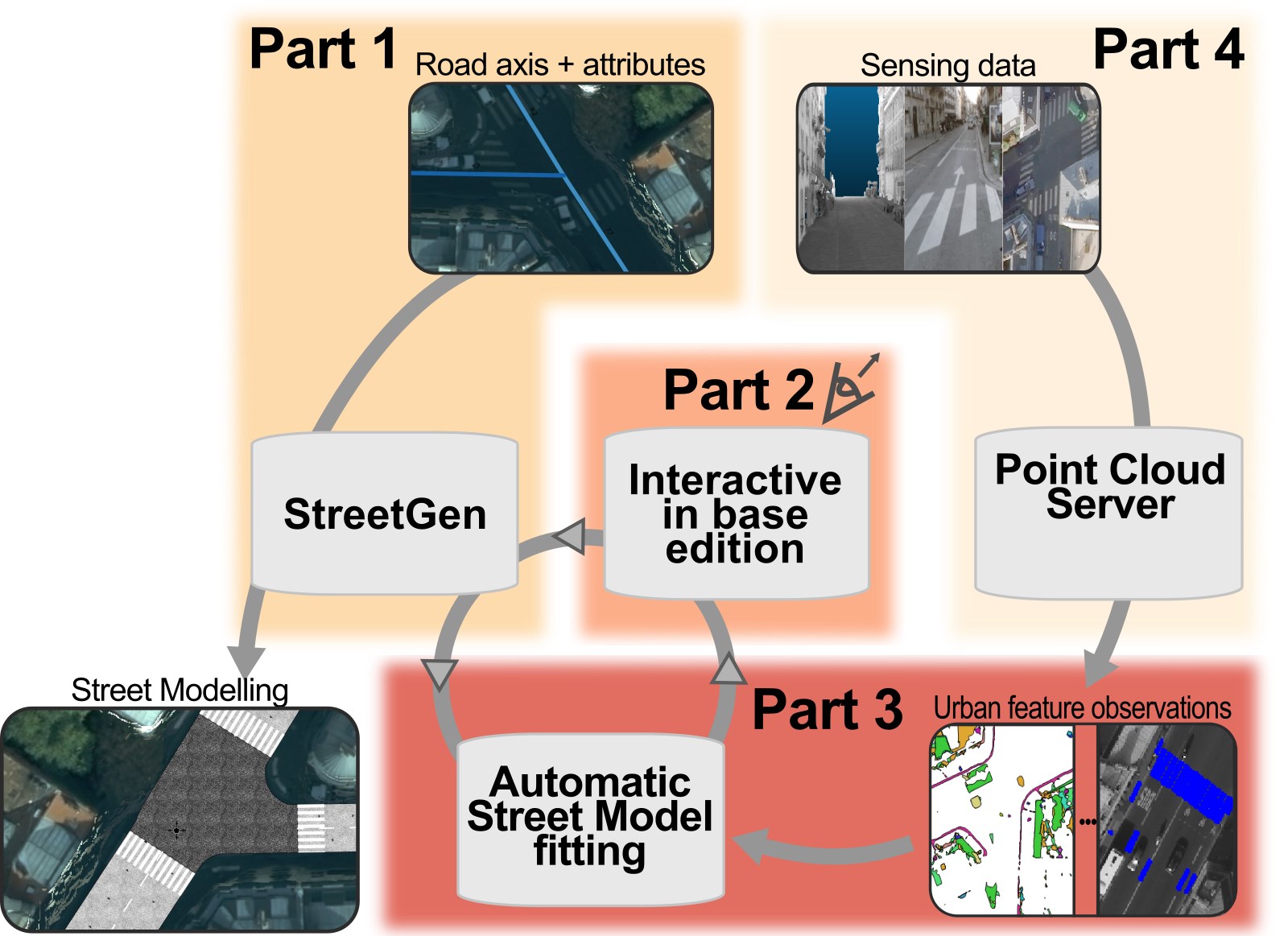 My PhD was about Inverse procedural street modelling, that is generate a street model (Chap3. road network, geometry, traffic information, street objects), then fit this street model to real life (chap5.). Real life here is expressed by massive point clouds (Chap2, Appendix A and B). Of course, the fitting is automatic, but nevertheless it is essential to allow the users to perform manual edit of the street model, in a in-base shared and concurrent way (chap 4).

World urban population is growing fast, and so are cities, inducing an urgent need for city planning and management. Increasing amounts of data are required as cities are becoming larger, “smarter”, and as more related applications necessitate those data (planning, virtual tourism, traffic simulation, etc.). Data related to cities then become larger and are integrated into more complex city models. Roads and streets are an essential part of the city, being the interface between public and private space, and between urban usages. Modelling streets (or street reconstruction) is difficult because streets can be very different from each other (in layout, functions, morphology) and contain widely varying urban features (furniture, markings, traffic signs), at different scales. In this thesis, we propose an automatic and semi-automatic framework to model and reconstruct streets using the inverse procedural modelling paradigm. The main guiding principle is to generate a procedural generic model and then to adapt it to reality using observations. In our framework, a “best guess” road model is first generated from very little information (road axis network and associated attributes), that is available in most national databases. This road model is then fitted to observations by combining inbase interactive user edits (using common GIS software as graphical interface) with semi-automated optimization. The optimization approach adapts the road model so it fits observations of urban features extracted from diverse sensing data. Both street generation (StreetGen) and interactions happen in a database server, as well as the management of large amount of street Lidar data (sensing data) as the observations using a Point Cloud Server. We test our methods on the entire city of Paris, whose streets are generated in a few minutes, can be edited interactively (<0.3 s) to regenerate the street model) by several concurrent users. Automatic fitting (few min) shows promising results (average distance to ground truth reduced from 2.0m to 0.5m). In the future, this method could be mixed with others dedicated to the reconstruction of buildings, vegetation, etc., so an affordable, precise, and up to date city model can be obtained quickly and semi-automatically. This will also allow such models to be used in other application areas. Indeed, the possibility to have common, more generic, city models is an important challenge given the cost and complexity of their construction.